In my last post I said there was plenty to keep us busy and I wasn't wrong. In case you haven't heard, Reader's Digest magazine are running a 100 word story competition.

Cornerstones also have a competition. Send in the first 100 words of your manuscript to win a critique on your full-length novel.

Had a call from a lady at Erewash Writers' Club with news of another workshop in November. Only £3-50 including buffet so that sounds a worthwhile exercise.

As if I didn't have enough to do I've been persuaded to become Nottingham Writers' Club's assistant treasurer. I don't know anything about keeping accounts but, as I'd already ducked a few other requests to help out, I thought I couldn't turn down this one. As it turned out the treasurer himself didn't turn up on Wednesday so I had to hit the ground running by collecting fees from non-members. That meant going home on the bus with twelve quids worth of loose change in my pocket. At least no mugger would want to run off with that weighing him down.

Found out I was just out of the top three with a highly commended in the Didsbury Arts Festival short story competition. The theme was 'maps' and once I had worked out a story I enjoyed writing it. At least I have another story I can put away and possibly use another time. I hope they are going to put the winning entries on the website so I can see what I was up against.
Posted by Keith Havers at 02:27 3 comments: 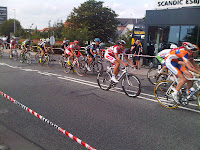 Thanks to several of you fellow bloggers out there plenty of competitions have been brought to my attention recently. Plus, with both my writers' clubs in full swing after the summer break and a few workshops coming up there's plenty to be getting on with.

The domestic cricket season has ended and all three cycling Grand Tours are over for this year so there's nothing to distract me from getting down to work.

But wait a minute. The Rugby World Cup has just started, England's cricket tour of the subcontinent will be coming up soon and my own pedal-powered racer is beckoning me from the garage.

Just when I thought nothing much was happening as far as my writing was going, something turned up. I have quite a few submissions 'out there' to magazines, competitions and agents but nothing has come back for a while. Even a rejection would be almost welcome just to prove my entries aren't disappearing into some Royal Mail black hole.

Then Saturday morning I had a reply from People's Friend. Not an acceptance unfortunately but not an outright rejection either. The first thing that impresses me with PF is their response time. I posted my submission second class on Tuesday and received the reply just four days later. Previous recent submissions have also been acknowledged (rejected) within a week so this wasn't just a one-off.

The letter from Shirley Blair explained very clearly what they liked about the story but also why it wasn't quite suitable for PF. Some suggestions were offered for the dialogue and the ending and I have been encouraged to amend the script and resubmit. I'm not aware of any other magazines that do this.

I must admit I've found it hard to find the right balance with PF. They have a traditional readership but still deal with themes such as crime and hardship. It's not all domestic issues and romance. So I suppose I'd better get on with it. Hopefully my first story in PF isn't too far away.