I read in the news the other day that, because of the popularity of text speak, traditional British words are dying out. So I think it's the duty of all of us to reverse this trend and start to introduce some of this vocabulary back into our work. This is my attempt and I expect you all to follow my example. See if you can guess which are the words in danger of dying out before clicking on the link above. Not sure I've used some of them correctly.

“Cripes!” exclaimed Dickens as he threw down his newspaper in disgust. “What bally awful news.”
“What is it?” enquired Darwin. “What malaise is troubling your mind? Has the tomfoolery of the rambunctious masses exploded into civil unrest?”
“Verily, if that were all that is wrong,” replied the renowned raconteur. “See for yourself.”
As the famous scientist picked up the sheet, the door opened and in walked their friend.
“Salutations!” declared Gladstone on entering the room. “And felicitations on your latest novel Mr Dickens. Rather a spiffing yarn I thought. I understand it has been lauded across the land.”
“Load of balderdash if you ask me,” said Darwin.
“Don't be such a cad,” said the novelist. “If I were a fighting man I would smite you down and quash those unkind sentiments of yours.”
“A woman is jilted by her betrothed and remains shut away wearing her wedding dress for the rest of her life? And that Pip seemed a laggardly fellow to me. Betwixt the two of them, I don't know which character was the most unbelievable. Unless I am lacking in some arcane knowledge.”
“For a naturalist you are unnaturally rude,” said Gladstone. “I thought it was a swell piece of fiction.”
Posted by Keith Havers at 02:42 5 comments:

Just a short trip up the M1 to Chesterfield on Saturday to take part in Sally Quilford's workshop on pocket novels for My Weekly and People's Friend. Also there was my friend Carol from Nottingham Writers' Club. It was a fantastic day. Sally is very friendly and relaxed which rubbed off on all the attendees. As well as learning the dos and don'ts of writing romance for these magazines we all had a lot of laughs. In addition, I swapped blog addresses with a couple of the other participants so my writers' network continues to grow. So if you get the chance to go to one of Sally's workshops I thoroughly recommend it.

Just to show that I did learn something (or not – you decide):

Keith's lips brushed Sally's cheek as they embraced and said their goodbyes. Turning swiftly away before his rugged good looks betrayed the sadness in his eyes, he left Chesterfield Market Hall wondering if they would ever meet again.
Posted by Keith Havers at 01:03 6 comments: 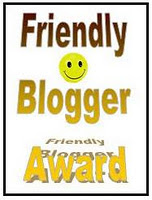 Thanks to Angela at Fonts and Fiction
for my Friendly Blogger award. Angela is a colleague at Nottingham Writers Club and often posts examples of her poetry and prose. If you like beautifully written descriptive material and brilliant scene-setting then please go along and have a look.
I think most of the blogs I follow have already received this award so I have just these two to pass it on to. As far as I know these have not yet been honoured and they are both very friendly.


A Mission Impossible For The Dark Fantasy Nightwriter
Posted by Keith Havers at 01:10 5 comments:

It's A Funny Old Game

It's a funny game this writing lark isn't it? At Trowell Writers we held our annual prize giving day on Sunday and it was the best turnout we'd had for a few years.

Since I've been extremely busy this year with magazine submissions and various competitions I only put one entry into the short story section this time. I thought the plot was a good idea at the time but when I read it back to myself it didn't flow as well as I'd hoped. It was a story based on the Three Wise Men but you weren't supposed to work that out until the end. I had done some research and used ancient names for the characters 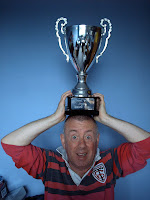 and also for the various places they travelled through. In other words I was trying to be a smart-arse. The completed work seemed a bit laboured but with the deadline approaching I sent it in anyway not believing it would get in the top three.

You've guessed haven't you? I wouldn't be telling you this otherwise and the picture is a bit of a giveaway. It won. Not only that, I was given the award for the best overall piece across the various categories. The judges said that they liked to see someone stretching the vocabulary but cautioned me not to overdo it.

This is me doing my impression of Nobby Stiles. You have to know about 1960s footballers to get that one.
Posted by Keith Havers at 01:12 9 comments:

It's been a mixed couple of weeks.

Received a rejection of four stories from Yours magazine. Another rejection from an agent. Didn't get in to the top places of the Red Cross short story competition for Day of the Disappeared.

As I'd hoped, the winning entries for the Didsbury Arts Festival short story competition have appeared on the website. You can read them here

Still have a few competition results coming up so there's plenty to look forward to. A couple of workshops as well to keep me busy.

PS
My blogger has been acting up again. Sometimes my headings (Create Blog, Sign In – that sort of thing) are appearing in French. I don't know if this is connected but some of my comments haven't been appearing on your posts either. I can only apologise. Je m'excuse.
Posted by Keith Havers at 05:13 7 comments: