Another summer, another exam season nearly over. After several years of doing this we think we've seen everything, but there's always something new for us invigilators to talk about in the staffroom. This year I've had to remove a spider from the exam room because a girl was too terrified to carry on with it sitting several feet away on the floor. It took me a while to scoop up the little blighter but eventually I managed to escort it outside. Another invigilator had to keep waking up a student in the middle of his exam. (Don't judge him too harshly – he hadn't been very well). She would have left him alone but his snoring was disturbing the other candidates. Unfortunately, when he woke up he found he'd dribbled over his answer sheet.

Looking forward to results day and the autumn resits.
Posted by Keith Havers at 04:02 5 comments:

It's turning out to be a busy summer one way or another. We've had a lot of flag waving recently. Right now some lads are kicking their balls around for the next couple of weeks. Our boys in white have been bowling their maidens over and trying to pull off a googly or two. Soon there'll be those chaps and lasses running round in circles, jumping in sandpits and throwing bits of junk around. 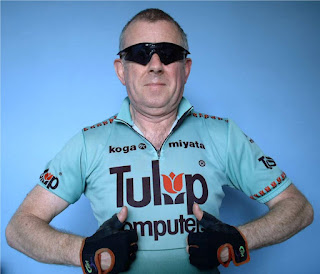 Personally I'm more interested in those magnificent men on their cycling machines. The French countryside, the wine the mademoiselles. Three weeks of pelotons, bidons and bonking. (All legitimate cycling terms, I assure you). They'll be sprinting on the flats and climbing the mountains while trying to avoid the gendarmes, the road furniture and the spectators. One year I might find time to cross the channel and see it for real. Until then I'll just shave my legs, slip on my Lycra and dream.
Posted by Keith Havers at 05:56 5 comments: